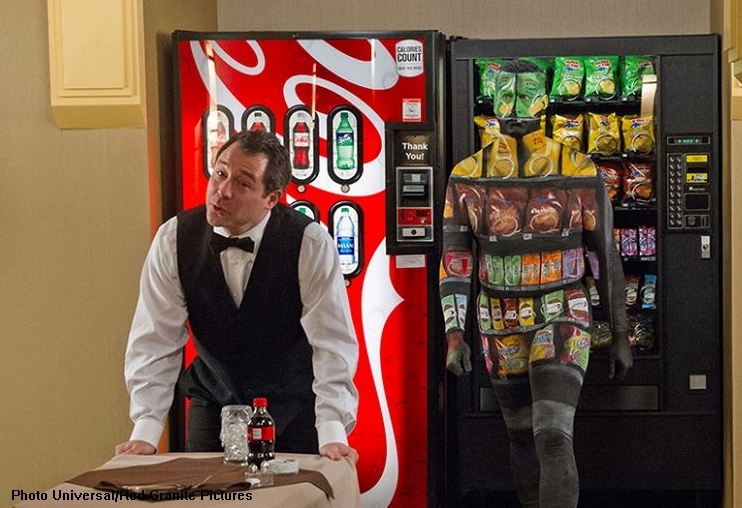 Carolyn did the camouflage body painting on American actor Rob Riggle for the Hollywood movie ‘ Dumb and Dumber To’ with Jim Carrey and Jeff Daniels. She was also invited to the World Premiere in Los Angeles. Below are a selection of interviews and reviews mentioning the success of Carolyn’s camouflage body painting for the movie. There is also a blog from Carolyn that describes her experiences in more detail (see Blogs).

Q. The amazing body paint gags, how did that read on the page and how did you do it?

A. Rob Riggle. There’s a great artist from England, Carolyn Roper, she was the one who did the painting because people have asked ‘Is that CGI or some kind of digital graphic’? It’s actual paint, camouflage and real artistry as far as the depth of perception and whatnot. She was amazing and it took hours and hours of standing still to be painted like that and I think the end result was totally worth it.

Q. I interviewed Rob (Riggle) a few moments ago and he told me that you guys flew a woman over from London to work on his camouflage suit? Why couldn’t you guys just do that scene digitally or use CG?

A. Peter Farrelly: We didn’t wanna. We didn’t want it cheap, that’s too easy. We didn’t like doing that. We like doing the real deal old school. Like in ‘The Three Stooges’ there were a lot of times when we could’ve done CGI but we didn’t want to do it, we wanted to do it the old fashioned way .And in this way, we painted him into that thing, we didn’t cheat at all. And it would’ve been easy afterwards to go in digitally and make him blend in but then it’s not the same. The fact of the matter is, that is exactly how it looked. Except for one at the end credit, at the very very end, at the very end of credit it was CGI, it’s obvious, but no, the first two, that candy machine, he’s painted in there. Took several hours

A. Bobby Farrelly That woman is remarkable, what she can pull off, that artist. She was just incredible. We gotta get someone who’s the best in the world at this, she was in London.

Riggle had to endure two intricate bodypainting sessions for gags that involved Captain Lippincott, and miraculously, no CGI was involved. The goal was to blend the character into the background of the scene, and makeup consultant CAROLYN ROPER, one of the world’s premier body artists, succeeded beyond anyone’s wildest dreams. After seeing the movie, the odds are good that few will look at a vending machine in quite the same way. During free time from filming, Riggle would don a body suit and stand in the environment in which the scene was to take place. Beginning with sketching, then painting, Roper would meticulously create every detail. On the day of the shoot, Riggle then had to undergo the final step of having his face, hands and upper chest painted over the course of two hours.

One of the most unforgettable images in the Dumb and Dumber To trailer is of Rob Riggle who plays twin brothers Travis and Captain Lippencott emerging from in front of a vending machine, having been painted to where he perfectly blends in. Looking at that particular scene, it’s tempting to think that it could only have been accomplished with the use of CGI, but that was not the case. Full body paint was used on Riggle to make this scene a reality and it took 6 hours to paint him where he blended accurately with the hotel hallway.