As I’ve mentioned in an earlier blog I’ve been very lucky to work in some beautiful locations around the world. Some very memorable body painting assignments have taken me to Hong Kong, Cape Town, Mumbai, New York, Las Vegas and the Caribbean, as well as numerous other lovely locations. But being based in London it’s always a pleasure to work in our beautiful capital city.

So, I was delighted to work on a body painting project in London with the British Heart Foundation (BHF) for their 2017 ‘Wear it. Beat it.’ campaign. The charity wanted 4 models camouflaged into iconic red backgrounds around the city using only body paint to encourage people to wear red and raise money for the campaign. Each fantastic model was chosen because they have been affected by heart disease and are all heart surgery survivors. These individuals show the breadth of heart conditions that devastate the lives of millions each year. They are alive today largely thanks to the research the BHF have funded. The images bring to light how more than one in four people (26%) die from heart and circulatory disease in the UK each year. 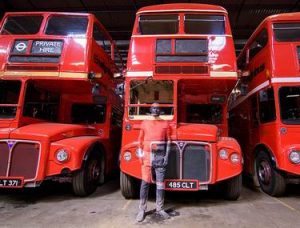 The first photoshoot was at the Ensign Bus Company in Essex. Our volunteer was 55 year old Mark Ellis who was born with a form of congenital heart disease called pulmonary stenosis and had open heart surgery just days before his sixth birthday. He’s now celebrating more than 50 years since surviving open heart surgery. I had to body paint Mark and camouflage him into the front of a vintage red London bus. Mark was very patient and great fun to work with and he was really interesting to chat to whilst the painting was taking place. Photographer Anthony Upton TNR. 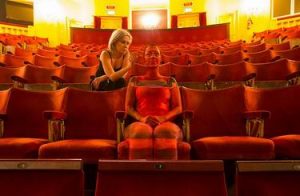 The second photoshoot was at Playhouse Theatre where I had to body paint 34 year old Laura  Fordham from South East London. Laura was diagnosed with a rare heart condition just days before her wedding and has lived with a pacemaker since 2013 to prevent her from going into a cardiac arrest. Laura was absolutely lovely to work with and I painted her whilst she was sitting in the seating area at the theatre and camouflaged her into the background of the theatre’s seats. Photographer David Parry. 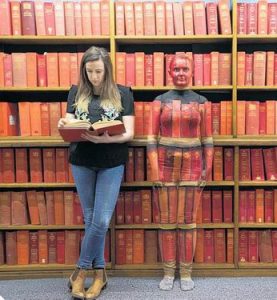 The Royal Society of Medicine Library

The third camouflage painting was at the Royal Society of Medicine library where I painted Rachel McCauley from Sussex. Rachel contracted a viral infection which affected her heart muscle and the lining of her heart early in 2017. I camouflaged Rachel against two bookcases of red books in the library. Rachel was a brilliant model to work with and the body painting went very smoothly. Photographer David Parry. 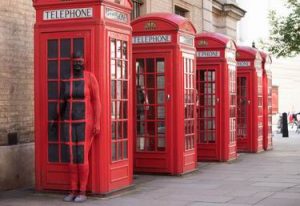 The final image involved painting Karen Jackson in front of an iconic red telephone box. We had a tremendously early start for this shoot and I left home at 3.30 am to get to the location and set up ready for the arrival of Karen at 5.15 am. Despite the early hour Karen, who underwent a heart transplant 11 years ago was up for the challenge of the body painting and again very good fun and interesting to work with. Photographer David Parry. 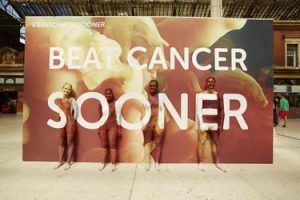 Back in 2013 I was very pleased to be commissioned to paint 4 models at Victoria Station in London. I had to camouflage them against a backdrop which was a billboard from the ‘Beat Cancer Sooner’ TV advertisement, encouraging the nation to come up with a million actions to fight cancer over a 6 week period. All of our amazing models were cancer survivors. Adam, Anna, Parminder and Linda were brilliant to work with, standing very still for several hours whilst me and my team completed the painting. This was a great campaign to be involved in. It generated a huge amount of interest at the station and was also featured on the ITV news.

I’ve body painted literally hundreds of models during my career and worked on numerous high profile camouflage body painting assignments. Some of these jobs have involved painting members of the public, not professional models. Camouflage body painting can be very tiring. The painting can take several hours and the model has to remain perfectly still during the process, although there are breaks in the painting process for the models to move around etc. But I’m always blown away by the enthusiasm and commitment that my non- professional models show. They’re always very interested in the whole body painting process. It’s usually their first experience with this type of art and they always do their utmost to make the painting go smoothly. These four wonderful volunteers for the British Heart Foundation campaign and the CRUK campaign were no exception and an absolute delight to work with. 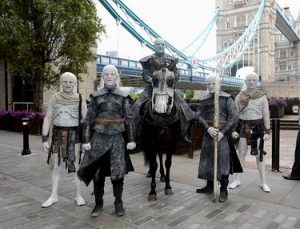 Body Painting  in London for ‘Game of Thrones’ Launch

Last July I was commissioned by Taylor Herring PR to work on the Sky Atlantic launch of the eagerly awaited seventh season of the hugely popular ‘Game of Thrones’. This entailed fitting the prosthetics and body painting the 5 actors who would be replicating the characters from the cult TV show. Once we had completed the transformation the actors looked absolutely awesome. They made several scary appearances during the week-long promotion starting at Hadrian’s Wall, where at first light the Night King was seen on horseback making his way south. We then moved on to Sheffield and Glasgow and finished at iconic landmarks in London including, Oxford Circus, Tower Bridge, The Tower of London and Buckingham Palace. The White Walkers and Night King even popped up at tube stations to give the commuters a fright! It really was great fun, most of my team, myself included, are huge ‘Game of Thrones’ fans, so it was brilliant to work with the prosthetics and such realistic characters.  Their unusual appearance around the streets of London, particularly at Buckingham Palace certainly turned a few heads.

This was an incredibly successful campaign for Taylor Herring and generated more than 100 pieces of media coverage and an unbelievable 20 million video views.