This is a follow-up to my last blog post called ‘Body Painting and Makeup as a Career FAQ’S’ .If you haven’t ready that one. please click here

Do you prefer make-up or body painting? 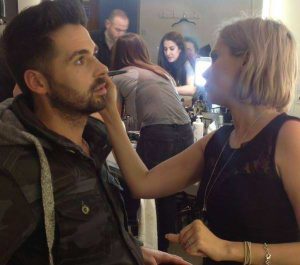 These two sides of my business are very different, but I really enjoy both of them. As well as being very well known for my body painting I’ve been part of the make-up team for the contestants on the X Factor for the last 4 years, working under Celebrity Make-up Artist and X Factor Chief Make-up Designer Julia Carta. It’s always great to pick up my make-up brushes which is a real contrast to the body art side of the business. Body painting can be very hard work – there’s often far more work behind the scenes and pre-planning before the actual day of the shoot. Plus stretching and bending for several hours at a time can be very tiring, but the transformations are usually worth it.

What makes a good model? 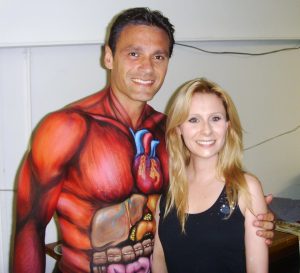 It does depend on the design but body painting isn’t a quick process and can take several hours. A good model is one who understands the process and can stand still for long periods of time. A nice personality also makes the job more enjoyable for everyone. Friendly chatter and banter does make the time pass more quickly. I do ask that models don’t use their mobile phones whilst they’re being painted. It doesn’t look professional in front of the client and it can be difficult for me to paint them if they’re constantly moving their arms and hands around, particularly if its camouflage work where the models do need to stand perfectly still.  I’ve also painted quite a few celebrities over the years and I have to say that they’ve all been marvellous to work with. When working with a celebrity confidentiality is paramount, but I’m always impressed by their patience and ability to cope with what is usually their first introduction to the bizarre world of body painting. Mark Ramprakash was one of the first celebrities that I painted for a healthy eating campaign and he was incredibly nice to work with.

Do you prefer painting on a male or female model?

If it’s a commercial job the client is usually the one who decides on the sex of the model. Some clients prefer a female model as they seem to attract more attention when they’re painted, but it does depend on the shoot and what the images will be used for. Personally I prefer painting men as you get a smoother canvas and a larger area to paint on without having to deal with the curves of the breast area on female models.

What has been your most unusual request so far? 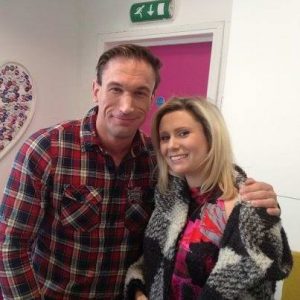 I have painted for some of the episodes of Channel 4’s ‘Embarrassing Bodies’ and was asked by the production team if I could make various small special effect pieces to replicate warts and infections  that men can contract during unsafe sex. So I got my liquid latex out and made a variety of little lumps and bumps, wrapped them up and set off on the train for the production offices in Birmingham. I think it’s fair to say that they have to be the most unusual contents of my handbag ever! Once I arrived I had to attach them to some fake penises. But these were the wrong colour so I had to paint them first to make them look more natural. As I was painting on plastic they took ages to dry so we all sat in the production office waving them in the air to speed up the process. Then once the fake penises were painted and adorned with their assorted warts and pimples Dr Christian took them on holiday to Spain where he showed them to the holidaymakers on the beach to demonstrate safe sex practices whilst having fun in the sun. So this was definitely my most unusual request so far and I think it was a really unique way to illustrate a serious health issue. A couple of years later I was invited to appear as a guest on Channel 4’s ‘Sunday Brunch’ to talk about my camouflage body painting. Dr Christian was also a guest and we reminisced about my unusual homemade attachments after the show!

Are you sad to see the paint washed off?

Once a painting is finished I’m always happy to see the end results. But as long as we’ve managed to capture the design with some good photography I don’t feel too bad once it’s washed off. Although I must admit that a tiny part of me is a bit sad as the model heads off towards the showers. Or we have to get busy with the baby wipes removing everything that has just taken a few hours to create.

What has been your most memorable job so far? 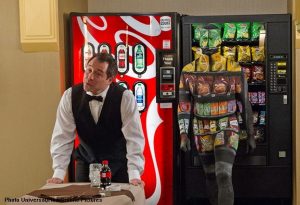 I’m very lucky to have had lots of high points during my career so it’s difficult to choose just one. Painting Rob Riggle for the Hollywood movie ‘Dumb and Dumber To’ has got to be up there as a really brilliant experience. Spending 3 weeks on the set of a major movie was incredibly interesting and such good fun. The whole crew were just so friendly.

All the work that I did with the late great Storm Thorgerson are some of the assignments that I’ll never ever forget. Working on album covers and translating his ideas into body paint was amazing. Plus spending time with him in Cape Town whilst painting for a series of fine art prints was pretty special too. In between the painting there was plenty of time for relaxing by the pool and chatting in the sunshine.

What has been your most challenging job so far? 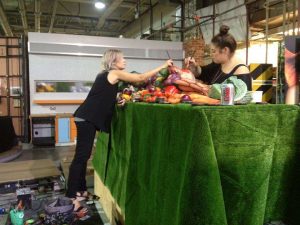 Backstage at the Alan Titchmarsh Show

This has to be the painting for ‘Dumb and Dumber To’ again! It was one of the most memorable, but also the most challenging. Camouflaging Rob Riggle into the background for the scene with the vending machine required absolute precision with the body painting as it was important that he was completely invisible to the audience before he moved and revealed his identity. Plus there was the pressure of painting for a major Hollywood movie and knowing that the producers were not going to use any CGI or tweak anything in post- production, so the camouflage body painting had to be spot on. Luckily I was given plenty of time to complete the intricate design so the finished results turned out really well.

Another tricky job was my appearance as a guest on ‘The Alan Titchmarsh Show’ to demonstrate camouflage body art. I took along one of my team, Alex, to help speed up the painting and it should have been quite a relaxing job. The male model had to lie on a table and I had to paint him to blend in with various vegetables. But with the combined weight of the model and the veg, the table started to collapse! So we had to wait until the table could be reinforced and this was seriously eating into the painting time. The show was due to go live at 3 pm and at one point around midday when we still hadn’t managed to pick up a paint brush I was thinking that we would appear on air with a half painted model missing a few carrots, a couple of cabbages and maybe a pumpkin or two. So we had to paint as fast as humanly possible to get him ‘hidden’ in time. Thankfully it all worked out really well in the end and our human arrangement of fresh produce managed to surprise the startled audience.

What has been the proudest moment of your career to date? 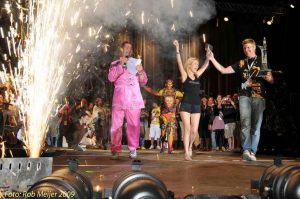 Becoming a World Champion for the 2nd time

I’ve had a few really proud moments during my career. There was the feedback from Peter and Bobby Farrelly the producers of ‘Dumb and Dumber To’ after I had finished the camouflage body painting for the film! Plus Jim Carrey telling me that my work was amazing! Also standing on the stage at The World Body Painting Festival in 2007 with my friend and fellow artist Carly Utting as new World Champions in the ‘Brush & Sponge’ category. And then again in 2009 when I won the ‘Special Effects’ category with my assistant Paula Southern. I was the youngest, and the first artist, in the then 12 year history of the festival to win the championship in separate categories.