Camouflage body painting is a very popular style of body art and I’ve been very lucky to work on some really interesting projects during my career. I’ve painted on numerous great assignments in some amazing locations including Atlanta, Cape Town, the Dominican Republic and Monaco.

Camouflage body painting is more specialised than a straight forward body paint and it can be quite tricky. The level of difficulty usually depends on the background that the model has to be blended in to. Personally, I prefer a busy background as the details make it easier to ‘lose’ the model. Sometimes it’s important that the model is completely invisible until they reveal themselves. But usually the model is partially camouflaged and can still be seen against the background.

My camouflage body painting has been seen on film and in many TV and online advertisements including the Hollywood movie ‘Dumb and Dumber To’ and for clients including The Ford Motor Company, LG Phones, Panasonic Viera, Irish National Lottery, Neckerman Belgian Travel Agency, Opticrom and Royal Caribbean Cruises. I’ve also made guest appearances to demonstrate my camouflage body art on The Alan Titchmarsh Show, Channel 4’s Sunday Brunch and Blue Peter.

Below are a few or my favourite assignments in more detail. 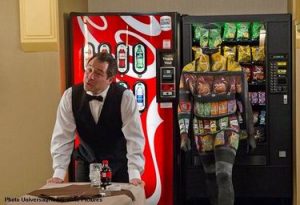 ‘Dumb and Dumber To’ Hollywood Movie

This has got to be one of my all-time favourite camouflage body painting assignments. In 2013 I painted the American actor Rob Riggle as Captain Lippencott for the Hollywood movie ‘Dumb and Dumber To’. For this assignment it was very important that Rob’s character wasn’t seen until he moved out of position so I had to successfully camouflage Rob in 2 locations using only body paint so that he would ‘disappear’ completely. One background for the painting was a brick wall, but the one that I enjoyed the most was painting Rob to blend in with the front of a vending machine. Using a very detailed background can be quite time consuming, but it makes it much easier to really hide the model. It was also important that the camouflage body painting worked very effectively as the producers Peter and Bobby Farrelly didn’t want to use any CGI or post production work to enhance the camouflage effect, so my painting had to be spot on. Everyone on set was really pleased with the finished results and Rob was an absolute delight to work. 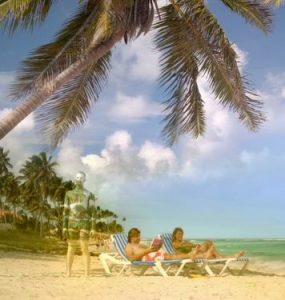 One of the nicest locations that I’ve worked in had to be a beautiful beach resort in The Dominican Republic. I was commissioned to body paint a number of models into different scenarios all with a beach and sea background. As there were multiple models to be painted I took my team member Emily with me to help to speed up the painting time. It was incredibly hot and for one of the scenarios we were up to our waists in the sea, painting before the sun went down. There was some free time at the end of the filming for sun bathing and shopping which was just wonderful. 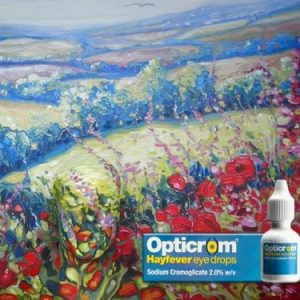 This was a lovely assignment. I was commissioned by Caravan Production Company to camouflage the heads and shoulders of 4 models and blend them in with some beautiful floral backgrounds which were painted by the very talented artist Gill Bustamante. We were hoping to get the painting finished in one day, so I took along my friend and team member Laura Scimone to help to speed up the painting time. The original artwork was beautiful and the finished film appeared daily throughout the summer on the ‘Pollen Watch’ segment on ‘Good Morning Britain’ to publicise Opticrom Hayfever Eye Drops. 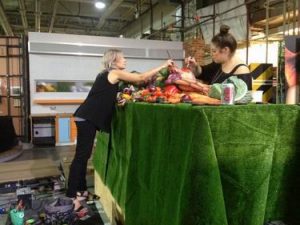 Behind the scenes body painting for The Alan Titchmarsh Show

In 2013 I was invited to appear on the Alan Titchmarsh show as a guest artist to demonstrate my camouflage body painting skills. I had to paint a model on a table covered with vegetables and successfully camouflage him against the produce. I took along one of my team Alex, and it should have been quite a relaxed morning before we went ‘live’ at 3 pm. But the weight of the model, plus all the vegetables, made the table collapse and we had to wait for emergency repairs to be made. So it ended up with quite a frantic painting session to get the model finished before the show started.  But the overall effect was really good and the assembled live audience didn’t spot the model lying in amongst the vegetables until he moved his arm and leg and revealed himself.

Camouflage body painting is also used extensively for PR campaigns and publicity stunts. These assignments are great fun but are usually very tight on the timings, so I usually take along one of my team to help to get the body painting finished as quickly as possible. Many of these campaigns are filmed outside so usually involve the models wearing clothing which is much more difficult and time consuming than painting directly on the body. 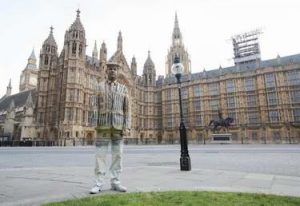 Camouflage body painting for RBL ‘Count them in’ campaign

One of the largest PR campaigns that I worked on involved body painting veterans into various locations around the UK for the Royal British Legion’s ‘Count Them In’ campaign. I was commissioned by Taylor Herring to paint the 4 volunteer veterans starting with a library in Manchester, a rugby stadium in Cardiff, a café in Plymouth, finishing in front of the houses of parliament in London. All the models were wearing clothing and my fellow artist and team member Laura Scimone joined me in our dash around the country painting the fantastic volunteers. This proved to be a hugely successful campaign covered by numerous daily newspapers and had a huge online presence. 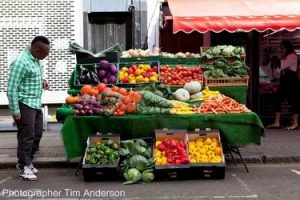 I also enjoyed working on the launch of Really TV’s CIA drama ‘Covert Affairs’ in 2013. I painted a model at 3 different London locations including a market stall, a London bus and a black cab. At the vegetable stall in Portobello Market the model was lying on the actual stall wearing a body suit and I had to camouflage her into the actual vegetables. All the details in the background made the model blend in very easily and we were all pleased with the end result. This image still pops up regularly all around the world and is the subject of at least 2 meme’s. 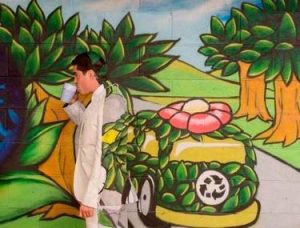 Another large multi-centre campaign which required camouflage body painting was for the British Parking Association. I had to body paint several models who were wearing body suits or clothing and blend them into various backgrounds in different car parks around the UK. We visited Cambridge, Nottingham. Stratford upon Avon and Warwick. This was to highlight the ‘Park Mark® Safer Parking Scheme’ which is a Police Crime Prevention Initiative and is aimed at reducing both crime and the fear of crime in parking facilities. Two of the camouflaged body paintings actually appeared on the back of double decker busses which were seen out and about in Norwich. 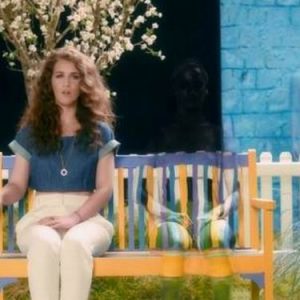 I’ve done quite a bit of body painting for the music industry over the years. My work has used for CD and book covers and fine art prints. One of the assignments that needed my camouflage body painting skills was the music video for the release of the CD single ‘Closer’ by the very talented Rae Morris. There were numerous models and dancers who would need to ‘disappear’ in the video and one particularly tricky image where I had to camouflage a model into a garden bench.  The open slat design of the bench needed really precise painting to successfully hide the model, who would actually be sitting on the bench next to Rae. Due to the size of the shoot and the timings I took along my team and we all painted our socks off to achieve a great end result for the client.