As I mentioned in an earlier post, I first started working with Storm Thorgerson and StormStudios back in 2004 when I was still a student. He was the artistic genius behind so many iconic album covers including Pink Floyd, Led Zeppelin, Genesis, 10cc and later Muse and Biffy Clyro and is considered by some as ‘the best album designer in the world’. My father was a huge Pink Floyd and Led Zeppelin fan so I had seen the album covers in his collection, but I never imagined I would get to work with the person who actually designed them. 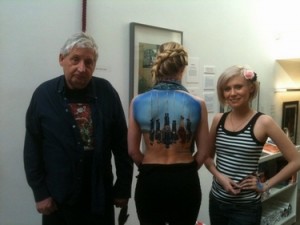 A friend had passed on my details as Storm was looking for a model for a photographic shoot for an upcoming CD cover. However the model would be posing in a telephone kiosk and it soon became clear that although my face might fit the brief, my body certainly didn’t. Being quite short, the kiosk would really accentuate my height, or lack of it! So I asked if I could do some work experience and that was the beginning of an artistic relationship and friendship that lasted until Storm sadly passed away in April 2013.

Working with Storm was anything but boring. On an early shoot I ended up standing in for the model and posing on an old plane in a hangar in my underwear, which as you can imagine came as a bit of a surprise, particularly as I was only there to do the make-up.

Over the years, as well as the ‘normal’ studio shoots, I body painted in vans, in fields and on beaches. I painted for fine art prints, book covers, CD covers, posters and exhibitions including a really interesting live event with Storm on stage at BAFTA. I was painting eyes on a model’s back whilst Storm talked about his career. It was so fascinating that I actually forgot where I was and stopped painting, until Storm prodded me back into action. Then everyone in the audience was given a cabbage. Just like on a shoot, Storm directed the audience while Rupert Truman from StormStudios took a photo of everyone holding the cabbage in front of their face. So just a regular night out for the audience really!!! 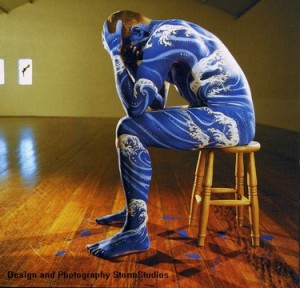 Storm really enjoyed using body painting for some of his work, including the CD cover for Biffy Clyro’s ‘Puzzle’. I love that design, it’s one of my particular favourites. Myself and Carly, a friend and fellow artist, painted a guy from head to toe with jigsaw puzzle pieces. The CD was a huge hit once it was released and was featured in numerous magazines. It was amazing to see the image on billboards around London. I was teaching body art out in Florida and went into a music store and there it was. It was great to see my work across the pond. We also painted a guy with a wave design for the single Folding Stars from the Puzzle album. 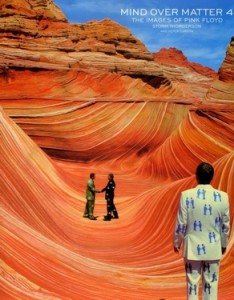 Painted suits on the cover of Mind Over Matter 4: The Images of Pink Floyd. Photo: Rupert Truman / StormStudios.

Flexibility and enthusiasm were key (and a sense of humour helped!)

My work with Storm wasn’t limited to body painting. I did hair and make-up if required, including the cover for American rock band ‘Umphrey’s Mcgee’ CD ‘The Bottom Half’. I also painted some coloured suits with designs from various Pink Floyd album covers. These were flown to the US and used in a shoot for the book cover of ‘Mind over Matter 4: The Images of Pink Floyd’.

We were out in the countryside on a shoot and I ended up strapped to the front of Dan, Storm’s designer and artist, who was wearing a harness. We were dangled out over a stream at an angle of around 45 degrees for a poster design! I seem to remember there were a few cow pats around too. Definitely not my normal day at the office. It was very funny!! 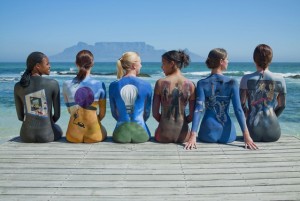 When I won the World Bodypainting Championship in Austria for the first time in 2007 we were driving home through Germany when my phone rang. It was Storm. He didn’t realise where I was, but I said I was on my way home from the competition in Austria. He asked how I had done and when I said I had won he said he felt like a proud father and that he liked to think he had a little bit to do with my success. And there’s no doubt in my mind that he did.

In 2009 we had a memorable trip to South Africa. On the flight over Storm’s TV screen wasn’t working. I offered to swap seats but he just shared my screen instead. It was just as well that we had the same taste in films! During the 2 weeks in SA we worked on the ‘Outback’ and ‘Beach Catalogue’ fine art prints, with plenty of time for sightseeing and bobbing around in the pool in between the painting. It was a great experience. 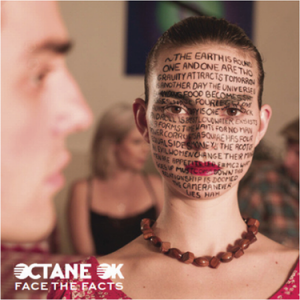 ‘Face the Facts’ CD cover for Octane OK. Me and Storm captured in the background! Photo: Rupert Truman / StormStudios.

Sadly the end of an era

The final shoot that I did with Storm was for the CD cover ‘Face the Facts’ for the Birmingham rock band ‘Octane Ok’. Once I had finished the painting Storm and I sat and chatted for ages. We got caught on camera and appear together in the background on the album cover. This is quite poignant as I knew Storm was very ill, but didn’t realise that this would be the last time that I would see him. He was hoping to make it to my wedding in March 2013 but sadly it was not to be.

I feel very privileged to have known Storm. As well as our working relationship he was also my friend and mentor and responsible for a really interesting and often very amusing chapter in my life. I knew that a shoot with Storm and the team would always be a memorable event. No one pushed me harder than he did, and he could be the most challenging of clients at times. But I don’t think I would be half the artist that I am today without having known him and worked for him. I still miss his dry wit and his wisdom, his crazy phone calls and even his shouting!

“We like creating custom images and are particularly fond of the illusory quality of body painting, not so much the decorative side as the odd or surreal side. The skills needed to execute these different qualities include dexterity, patience, speed and a particular visualising capacity – Carolyn has these skills in spades plus a sense of humour and a good nature, so vital in withstanding the pressures of the business and working with demanding clients….not me I hasten to add”.
Storm Thorgerson. Graphic Designer & Film Maker. 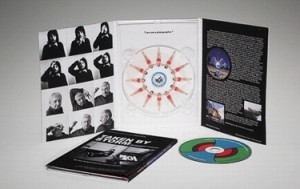 StormStudios is a design company formed in the early 1990’s by Storm Thorgerson (ex Hipgnosis and Greenback Films) and Peter Curzon (designer), joined soon after by Rupert Truman (photographer) and later by Dan Abbott (designer and illustrator).

Together with a changing team of freelancers, we have created designs for many diverse projects including exhibitions, company logos, websites, typefaces, books and airships, but most notably we have designed album covers for bands such as Pink Floyd, Muse, Biffy Clyro, The Steve Miller Band, Ian Dury And The Blockheads, Pendulum, The Cranberries, The Mars Volta, Alan Parsons and many others. Storm sadly passed away in 2013 but the Studio remains busy creating ‘normal but not’ designs.

Visit their website at stormstudiosdesign.com and also the stormsight.co.uk website for beautiful fine art prints and also the recently released DVD ‘Taken by Storm’, a film by director Roddy Bogawa which is described as “an intimate portrait of Storm that reveals his character and gives a deep insight into how he worked”. This fascinating documentary is a must for all fans out there.