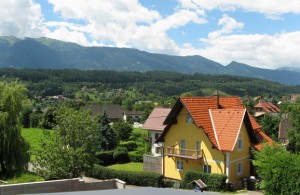 Seeboden. The beautiful location for the World Body Painting Festival in 2003.

In 2003 when I was still in college I saw an advertisement in a make-up magazine for what was then ‘The European Bodypainting Festival’ in Austria, which is now of course the very famous ‘World Bodypainting Festival’. It looked amazing so I made a few enquiries to see if I was eligible to enter, as I was a student and had never actually painted a body before. Alex Barendregt the organiser said I was very welcome, so I persuaded my sister Katie to be my guinea pig and model for me and we set off by train and plane for the lovely little town of Seeboden in Austria.

There were numerous large tents set up in a field and I was stunned by the size and professionalism of the festival, even all those years ago. Body painting on the continent was obviously a thriving industry and there were several independent body painting companies competing amongst the 84 other artists in my category. I must admit I was slightly worried that I might have bitten off more than I could chew. I had never painted a body before, I had no actual design planned, just a few ideas in my head, and just a small selection of paints and brushes. 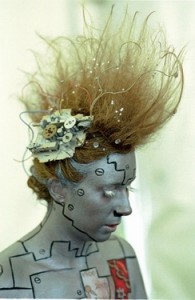 My 1st ever body painting with futuristic hair and head-piece.

Was I a tiny bit mad?

Looking back I must have been a tiny bit mad!! But I could find very little information on the festival before we went and I literally had no idea what to expect. I didn’t know we would be in a tent in a field and even turned up on the first day ready to paint in my stilettos!!! Something that I’m still teased about to this day from some of the other artists.

I started painting, literally making my design up as I went along. I just hoped that I could finish in the 6 hours without shaming myself! We didn’t even know there was a catwalk for the models. When we saw the first model dance their way down the runway I think my sister wanted to stalk off into the hills and never come back. It was so funny! I got her finished in time and we wandered off to the dreaded judging tent!

But her humiliation wasn’t quite over. We then had the stage presentation. So there she was wearing just a thong, covered in silver paint, with her hair standing on end, a piece of plastic radio stuck to the side of her head and I forced her to walk like a robot on stage in front of hundreds of onlookers. I’m still not completely sure she’s forgiven me…. She’s moved to America!

We then had an anxious wait for the results. I was completely amazed to finish in 17th place, not too many points behind many experienced artists and competitors. 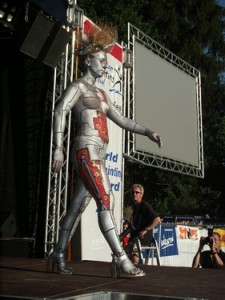 Katie braves the crowds and sets off down the catwalk.

I had made it through to Day Two!

As I had very unexpectedly qualified for the finals I had to paint on the second day! Again I had no planned design, in fact I hadn’t even thought about it, as I was sure I wouldn’t get high enough in the rankings to qualify. But we eventually came up with a design based on ‘The Wizard of Oz’ I put Katie’s hair in a messy bun on top of her head to represent the tornado complete with a little house that we cobbled together that morning out of a perfume box. Not my most sophisticated head-dress ever!

It was an incredibly hot day and Katie wasn’t feeling too great, and I think you could say that my painting had a strange naïve charm about it!! Apparently my tiny interpretation of Dorothy’s little dog Toto looked more like a caterpillar shuffling up the Yellow Brick Road. But in fairness it was only the second ever body painting that I had ever done, so I think it turned out as well as it could have. Finding myself in the judges tent again explaining the Flying Monkeys that I had painted on Katie’s back was just hilarious. 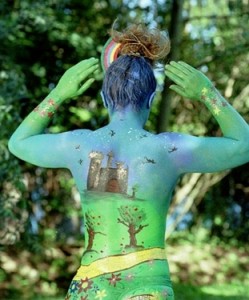 My Wizard of Oz body painting.

But there was far more laughter to come. We had no music with us for the stage presentation, so I asked the DJ if he had Elton John’s ‘Goodbye Yellow Brick Road’. Unfortunately something got lost in translation and Katie popped onto the stage to ‘Saturday Night’s Alright For Fighting’. We couldn’t believe it! We laughed so much afterwards until our ribs physically hurt!

What a fantastic experience.

But at this trip to my very first festival I met so many great people and was given such encouragement from other artists and photographers, many of whom are still friends today. I left Austria completely hooked on body painting having achieved 17th place on my first trip. In many ways I think it might have been my best experience at the body painting festival. I had no expectations, in fact all I wanted to do was get finished in the 6 hours. There wasn’t a lot of stress and there were so many times when we laughed until we cried. 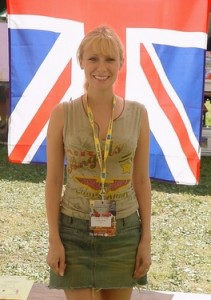 Flying the flag for the UK at my first Body Painting Festival.

Once you’ve poked your head above the parapet and you’re in the top 5 in the rankings the pressure is really on. You’re painting against the clock, against your peers and also quite often against the weather. Austria is a land-locked country and the summer temperatures can often reach 40 degrees. So all in all it’s an incredibly stressful experience.

But watching the stage presentations back in 2003 with the stunning body art, I never in my wildest dreams imagined that I would win once, let alone twice! Standing on the stage just 4 years later in 2007 and then again in 2009 as a World Champion Body Artist has got to be up there as two of the most incredibly proud moments in my career.

I’ll cover the 2007 and 2009 World Bodypainting Festival in more detail in future blogs.