My invitation to attend the Hollywood Premiere of ‘Dumb & Dumber To’.

In 2013 I was the body painting artist for the camouflage scenes in the Hollywood movie ‘Dumb and Dumber To’ starring Jim Carrey and Jeff Daniels. So this time last year I had just got back from a truly memorable trip to Los Angeles for the World Premiere of the film. 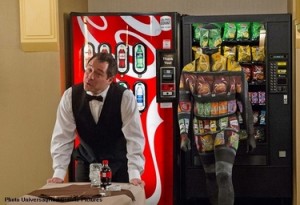 The body painting challenge on set

I had to camouflage the American actor Rob Riggle into two different backgrounds for the film. One scene was set against a wall in a garden and the other one was the infamous ‘vending machine.’ The directors of the film Peter and Bobby Farrelly didn’t want to use any CGI, or any post production work. They wanted to film the scene exactly as had I painted it, so I knew the body painting had to be perfect. The vending machine design in particular was very intricate and Rob was incredibly patient whilst I took several hours to blend him into it seamlessly. When I had finished everyone was very pleased with the end results and when “wrap” was called at the end of the scene I was given a round of applause. It was a brilliant experience being on set for 3 weeks and meeting the cast and the crew and Rob was an absolute delight to work with. So I was thrilled when I was sent an invitation to the Premiere in November 2014.

I flew to Los Angeles and stayed at the beautiful Beverly Hilton which is an iconic hotel where numerous major movie stars have stayed over the years. The walls were lined with black and white photos of famous past guests. The pool area was also reminiscent of a 1950’s film set. The weather was amazing with temperatures in the 80’s. 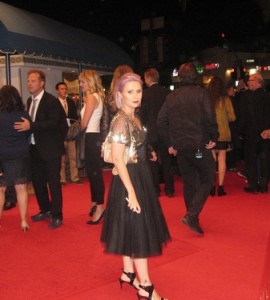 On the Red Carpet for the Hollywood Premiere of ‘Dumb & Dumber To’.

The Premiere was held at Westwood Village Theatre in Hollywood. It was very exciting arriving at the theatre with barriers on all the pavements and lots of security guys around. I definitely had to do the obligatory photos on the red carpet!! We made our way into the theatre and everyone was given tubs of popcorn and cola in the foyer before we sat down to wait for the film to begin.

It was quite a surreal experience watching the film and seeing my work on the big screen. Watching the scenes where Rob was camouflaged was amazing. Seeing him hidden before most of the audience had realised and then hearing their reaction when he moved out from the background was great. When the film finished and the credits rolled my name was on the screen as the Make-Up Consultant. It was certainly my most unique cinema experience ever! 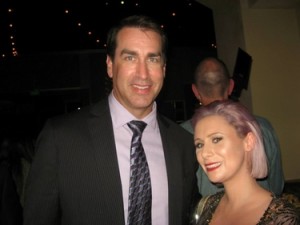 Posing with Rob Riggle at the ‘After Party’.

Joining in the ‘After Party’

Once the film had finished we all set off for the ‘After Party’ with the cast and crew. It was great fun and there must have been hundreds of people there spilling out of the venue onto the lawn. There was a lot of delicious food and it was great to meet up with some of the people that I had worked with on the film, including the lovely Rob Riggle.

I would have loved to stay for longer, but all too soon it was time to leave the sunshine and return to London as I was busy working as a make-up artist on the X FACTOR as one of ‘Head Make-up Artist’ Julia Carta’s team for the contestants. I’m sure I bored them all to tears with tales of my travels. But I have to say it was an amazing experience and definitely the highlight of my body painting career so far! 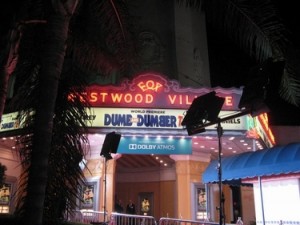 Westwood Village Theatre, Hollywood – the venue for the Premiere.